Chelsea in the Earth

The screams woke her, as they had every night since. The room was dark but for the blue glow of the LED alarm clock. She decided to stay awake. Use the time to…. What did she even do anymore? Down here in this cold cavernous thing that she tried to call home. But it was miles from anyone or anything she had ever known. Outside was chaos. Further beyond that was a harbinger of true chaos; the chaos of death. And it was the death of chaos. She imagined it out there, tearing through empty space, a black void tearing through a black void.

She shuffled into the minimalistic kitchen. The little refrigerator that towered no further than her kneecaps hummed happily. She pressed a button and her breakfast began to make itself. She could hear the weird pings and pangs of the internal machinery as a composite clone of scrambled eggs was created from raw materials. NASA technology. Gotta love it. She bet they didn’t account for how boring the ease of use would make everything. What she wouldn’t give to be able to perform the ritual of whipping up an omelet in the morning. At least they had mostly left the coffee machine alone. She decided to make herself a cup.

“The anomaly has probably passed the Mars orbit by now”, she said aloud. Amateur astrologists, if there were any left who weren’t rioting in the streets or murdering and raping to their hearts content, probably had a fairly good view of it with their semi-professional telescopes at this point.

Hot cup of coffee in one hand, plate of ‘eggs’ in the other, she shuffled from the sterile kitchen into her office. That’s what she’d come to call it, again in an effort to hold onto some semblance of normality. It was only a small hard drive and a screen. A few buttons and a rolling ball inlaid in the desktop that worked much like a mouse. With these essentials she could fulfill her duty. With these essentials she could so what she had been charged to do by…. no one, basically. It had fallen to her as one colleague after another had been lost to the chaos of a world that had discovered it would soon end. The difference between her and them? She had known all along what purpose this underground lair had served. Stumbled upon it in old R and D files that were not meant for anyone’s eyes, only for the teeth of a shredder. So when the shit hit the fan, and it had hit hard, she’d known she would be safe here. Deep down, hidden from the world. And perhaps she could keep the world safe as well.

She sipped her coffee and remembered her first day of work at NASA. Standing in the breakroom, a remarkably similar mug of warm joe in her hands, speaking to Derrick. He had been charged with orienting her. Showing her around. Filling her in on her official duties, and those duties that were so unofficial that even he wasn’t entirely clear on them. 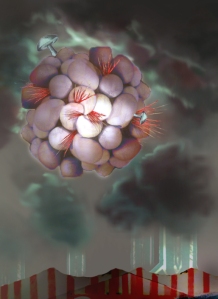 “You’ll be with the Trackwell program. It’s a silly name, a little too on the nose, all things considered. Trackwell was orchestrated in the late seventies once our lesser known satellites and other detection mechanisms started finding new planets and other anomalies beyond Pluto. Some of these bodies were so unusual that they have yet to be identified, and what makes it even more fun are the irregular and unpredictable orbits. They’re so far from the sun that it doesn’t really have a consistent hold on them. They can come careening through the middle of the solar system any day now. Or not. We just don’t know enough about them. Now, recently, of course, some of these ‘undiscovered planets’ have gone public, but the anomalies? The weird ones? We just keep track of them. Now in the mid-2000s, after we had advanced deep space drones, another nonpublic NASA function, we started being a good bit more proactive about the whole thing…”

Chelsea’s ears had perked up then. She had known everything up to this point already. It was amazing what you could find out if you knew how to hack and navigate the deep web.

“At that point Trackwell became less about tracking and more about defense. The more dangerous bodies out there in deep space were fitted with nuclear devices and all sorts of other advanced tech so that if they ever do end up coming our way, we can steer them off course and avoid disaster,” Derrick had smiled, obviously amused at the way Chelsea’s mouth had dropped open. She wondered now if he would find the conversation as amusing if he’d known what she’d had to do the very day before.

“I can’t officially give you any advice,” the recruiter had said to her only a month prior to her meeting with Derek, “But if you really want a career here, you’re going to have to give that up….” And she had.

Even with the anomaly nearly to the point where intervention was a possibility, she knew that that the day she had made her sacrifice for the chance to save the world would always be the worst day of her life. She had handed it away and moved on. And for what? Always a dream to save the world. Always a hope to bring light into the lives of people. The people rioting in the streets? The people murdering one another because they believed the repercussions would be null and void in a matter of days? Or was it now only hours? She realized then why she had not told anyone of this place. Of the Trackwell program. Because she had hoped that the people of the world would really chew on the fat of impending death, inevitable oncoming destruction, and decide to spit it out. To reject it. To embrace their higher selves in their final moments. To validate the decisions and the sacrifices she had made for the chance to save them. They had disappointed her. They had wronged her. And every night since she had awoken to the sound of it, screaming.

The screen, or in actuality the slender metal speakers beneath it, began to beep at her. According to the images and the scrolling lines of data on the left hand side of the console, the anomaly was gaining speed. It would arrive sooner than expected. It was possible that this thing, whatever it was, could cross the threshold of safety within an hour if it didn’t lose speed.

Chelsea thought again of her hope for the world and of the destruction and careless evil that the world had given her in response to this hope. Had it gotten worse or better in the hours since she had last checked? Were there countries still pointlessly at war? Were there still mobs of people flooding and destroying cities? There was a television in the next room, and despite her promise to herself that she would not return to it after her last exposure to the horrific state of the world, she decided to try again. Surely now that the anomaly was closer, they will have snapped out of it? Surely.

Something was strange about the news broadcast. Everything was of a red tint. The news anchor sat before the camera, speaking about the man made wildfires that raged all over the United States, but something was not quite right about him either. He seemed a little nervous, a little erratic. “James,” he said to apparently no one. “Will you wipe Carol’s blood off of the camera lense?” Suddenly, what appeared to be a pink cloth obstructed Chelsea’s view of the news anchor, but then it was pulled away. The red tint was gone, and as the camera man resettled, the camera shifted slightly to the left, revealing Carol, slumped face down on the desk, the back of her skull and what once lie beneath it completely gone.

Chelsea turned off the television.

“I have to save them,” she mumbled to herself. She returned to the console and immediately saw that the anomaly was now within the realm of safety. For only a short time now, she would be able to simply press a button and, fingers crossed, divert this deep space oddity away from Earth entirely. What it was, this anomaly, was a mystery. But considering its density and speed, it would destroy earth so thoroughly that it was possible that no discernable trace would be left. How it moved so quickly with such a mass was mind boggling to even the most astute scientific minds. But the next discovery would boggle scientific, spiritual and philosophical minds alike. This was the discovery that set the world ablaze. The anomaly varied in speed and trajectory because it was following the Earth. Any normal celestial body moving toward the sun at a variable, random speed would leave any chance of impact undetectable. But the anomaly was adjusting its course. If a change in speed or another celestial body left the anomaly and earth no longer on a collision course, the anomaly would course correct, as if it were being controlled by a living entity. Scientist argued that no living entity could survive on something with such an extreme gravity, but spiritualist argued that God need not live on a thing to move it by His hand.

Chelsea wondered if another hand might be moving the anomaly. A human hand, or a hand preprogrammed by a human and then fused with the anomaly in order to control it. NASA wasn’t the only country with secret deep space technology. If this was the case, perhaps her own controls wouldn’t work at all. Perhaps she would fail at saving the world. The prospect sent a familiar chill throughout her body.

The beeping resumed again. This time to indicate that the anomaly was approaching the end of the safe zone. She had to do something now or there was no guarantee of a real course correction. And perhaps if she did this at the very last moment and there were other controllers somewhere else in the world, this last minute change would throw them off guard, leave them unable to undo anything There was no way of knowing, really.

She reached for the console, her hand on the inlaid ball that felt cool to the touch, like marble. She needed only to press it in and then move it to the left or right, but she hesitated. She could hear the screaming again. Now louder than ever. The echoing, haunting sound of the thing she had given up. The screaming newborn as she handed the thing over to the mother she had chosen for it. She hadn’t even known the sex of the child. She had never given it a name. She had given up her child for a world like this. For a world where an innocent could die as easily as a dog when someone wanted food and shelter and not another mouth to feed. And the screams of that starving child had called to her every night. The look of grief and guilt on the adopted father’s face as he had groveled at Chelsea’s feet, begging for forgiveness. Begging to be excused for the sin of choosing his own needs over those of the child’s. Chelsea could not offer forgiveness. Instead, she’d come here, fled here to escape the screams and the haunting, mourning eyes, but they had followed her no matter which direction she’d turned or how fast she’d run.

Chelsea removed her hand from the console and watched as the anomaly crossed the safe zone with no change in course. And the screaming stopped.