I have been trying to stay as sober as possible for as much of the day as possible. Divorce is draining and overwhelming at times, but I don’t want to miss out on the experience. I don’t want to push my feelings down or avoid reality. I mean, obviously I’ve learned that those feelings will make their way back up one way or another.

Lately, I have been going on a lot of walks to clear my mind. When I was walking home from getting coffee at about noon today, I started to sweat, and it felt so good. Then, like a rush of lust and desire, I wanted to go for a run. 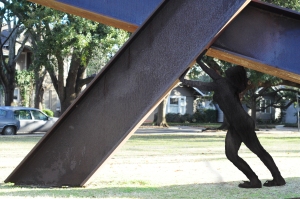 When I got home, I stripped down to the least amount of clothing possible, lathered on sunscreen, laced up my worn-out shoes, and put my iPod on. As I stepped out the door and put my iPod on shuffle, the first song that played was, “Dirt Off Your Shoulder” by Jay-Z. The song was the most appropriate song my iPod could have played at that time. Appropriate on so many levels. Who knew Jay-Z had layers?

I used to say that people who ran in the heat of the day were crazy people. Then I realized that while, yes, they are crazy, they are also going through transitional phases in their lives. No one, in their right mind, in a decent state of their life will run in 95-degree heat thinking about how deep Jay-Z is. I guess you have to be crazy to be a dedicated runner anyway. I can’t speak for other runners, but I can say that I run to run away, and I run to run to.

While emotional pain is ultimately inescapable, running is the drug which balances it all out. I can run away, and when I make it back home, everything feels okay again. Today I remembered why I ran before, and why I will now continue to run. I also remembered today that ladies is pimps too.