Have you ever driven through the city and just watched? Watched life, people, our society? I wonder what people are thinking and how they are feeling. In what direction are they going? Are they living their dream? Are they working this job because it’s the only one that would hire them? What do people think waking up Monday morning before they head to work? What if? What if I had never given up on my dream? What if I quit? What if I had worn a condom that night? Would I be in this same situation?

How do some people feel when someone close to them passes away? Do they even know how to feel? Are they in need of comfort? Do they shut down and stay away? Do they start thinking about heaven and hell?

Some walk the city streets knowing their lover has cheated on them. What are they to do? Do they act in violence, does rage take over their heart and mind? Do they leave and hurt, or do they stay and suffer?

From morning until night in the city streets there are those who love, and those who hate, the ones who turn to drugs and alcohol to escape. I wonder who walks with angels and those who walk by themselves. I see the rich and I see the poor. The single parent mother who is in need of a lot more, more to get by, the bum on the corner holding a sign asking for money in search of his next high. The addicts in alleys whose minds can be found high in outer space, the sound of the shopping cart wheels rolling to find their place. In traffic cars honk to move along, workers just getting off pace up and down to the city’s song. Reflections pass in the mirror glass tower, the miserable who go find laughter in happy hour.

I’m sick of this but thankful, faces—colors of black white and all in between races. All in a city maze. The many eyes that fly by in the subway, the once felon with the X on his back is turned down once again for his younger days of performing the art of misbehave. The man who changes his voice at times to avoid the criticizing eye for being gay. Where are those who are themselves and those who pretend, where are the unhappy who cannot wait for the end?

A man feeling ashamed asking God over and over for forgiveness for committing the same sins. Who knows God and who knows only what they see? The secretary at the office who greets you with a smile, but inside is stressed and concerned for her teenage daughter who is running wild? What mind is battling the addiction of pain pills? Who feels like they work just to pay bills? Who will cry when they are alone tonight? What pair of lustful eyes undresses every woman in sight? Which person is having a hard time staying up from falling? Which husband is bored of his life at home so after work finds every excuse to begin stalling? Which soul will make a difference in someone’s life? Is it the one pushing the food cart, the dish washer, the security guard, or the CEO? Quickly to slowly the city of minds flows. 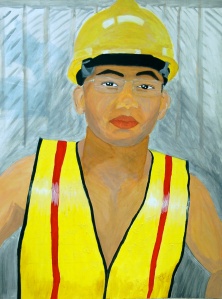 Self Portrait by Martin Nguyen

Unseen prayers are being sent up waiting for blessings to rain down. What goes through the mind of the quiet taxi cab driver who thinks of his family back home whose country is at war? He picks up the lady with breast cancer which has stolen her joy. The unappreciated custodian whom no one cares to speak to is passed by the young man who delivers food to the tall buildings that touch the sky. He is nervously awaiting his blood test results to come back as he delivers to a businessman who is so attuned to his work his children don’t know their father.

What causes the stressed face of the wealthy doctor? Could it have something to do with the hospital patient who just received his estimated time to live? The father who is afraid of raising his daughter in this world or the mother who will go home and play mommy all over again to the babies that her babies had? Which single parent will get off and rush to their second job while their children are at home alone learning from the television? You never know what the people who walk the streets of this city are going through, where their mind is leading them, if they’re happy, how their life is going, or if they’re on the verge of giving up.

I ask the question if we are helping, or making the situation worse for our people. Do we have too much pride to compliment, smile, or speak to someone we do not know? How do we treat others? Our actions towards others could help motivate, or prevent someone from suicide. Picture how life could be if we were to put aside ignorance and hate and treat each other with love, respect and put ourselves in others’ shoes. People, thoughts, feelings, hurt, pain, happiness, rejection, choices, fear, hope, hate, and love all remain in the city. The city of minds.